A Summer Swim Team: Twelve Years Old and the Heyday of My Life 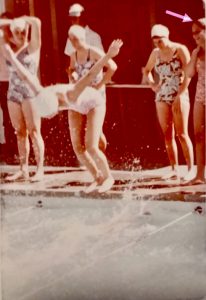 Twelve years old and a summer swim team is a touchstone on the timeline of my life. Little known fact, I’m a great swimmer. It’s one of the few things I’m not modest about. My teacher and coach, Bob Schleihauf, taught me the most about swimming.

When I arrived home, my dad wanted to understand what happened and he took me to the teacher. What was the key? Confidence. I jumped in the deep end with the teacher standing by and could swim easily and freely. My teacher had never put me in deep water before even though I could swim. That was the end of my non-swimming days — and of that teacher. I had needed someone to stand by. It may seem minor but having a comforting presence nearby ready to give you confidence and support can be crucial in many of life’s endeavors.

And then along came Bob and competitive swimming. I once overheard whispers of people wondering if I was Olympic material. But I wasn’t a cut-throat competitor. I loved the camaraderie, the exhilaration, the collaboration and mutuality of shared goals and dreams. I was fast, for sure, and to this day, I remember how Bob improved my stroke. I remember how he taught me, what he said about how to pull your arms through the water, how my hands would enter the water. I remember how he looked, his voice, and demeanor. I often think of him when I swim. And I think of the confidence he instilled in me to know that I was gifted in this area of life when I was young.

I especially remember one swimming race. I got up on the block and saw the coach of the opposing side wink at the two swimmers from their team. I was a skinny kid. And these two girls were stocky and strong looking. It didn’t bother me. I never looked at my competitors when I swam. I was a fish. I jumped and swam, never looking to the left nor to the right. I just swam straight heading for the other side of the pool as fast as I could. It was that easy. 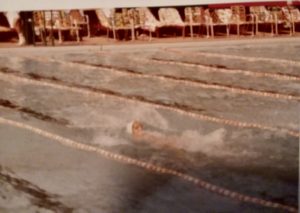 On your mark, get set, go! I was off, all splash and race, all arms and legs, easily and gracefully gliding across the pool. I couldn’t hear the screams as I swam. I later learned the three of us swimmers were neck-and-neck the entire time until the last few yards when I darted ahead of the pack. I slammed my twelve-year old hand into the wall and lifted my head. Fellow swimmers and spectators were going crazy, mouths and eyes wide open, a cacophony of sound, people jumping up and down. I didn’t know what happened until they described the race and what I had done. And I especially remember one of my screaming teammates, named Larry. I can still see him going nuts, also a skinny kid, a great swimmer in his own right, filled with passion and enthusiasm for what he was doing and for what he loved.

These memories are touchstones. It was something I was good at, and I obtained many metals to prove it. One winter I tried swimming with another team, but I hated the indoor pool, the coach was different, the chlorine and earaches plagued me. I quit that team, but for a few summers, every summer, I swam with Bob at the Roslyn Country Club. 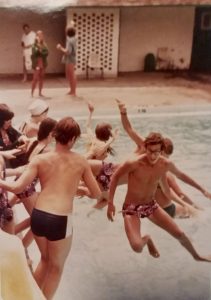 Every year at the end of the season, there was a banquet where we dressed up, ate, and awards were handed out. I remember Bob speaking about each kid he handed out an award to. And then my age category came – and I didn’t get one, and no mention was made of me or of my swimming. At that moment, I fell into a parallel universe. I clapped for the person who got the award with a smile plastered to my face. Pretending I was okay, I watched my fellow teammates with my heart dropping. I felt my throat bolt shut. It felt as if the room was swirling. Like there was cotton in my ear as I listened to the static of life, having been totally passed over. I watched the exact same thing happen for Larry. His reaction was the same except that I don’t think he hid his disappointment as well as I did. I didn’t see any plastered smile on his face. We were top in our age groups and so it was shocking. It didn’t make any sense. And then, at the very end, after all the awards were given out, Bob brought out two beautiful silver bowls. Bob spoke eloquently about the two people on the team who excelled, who worked harder than he did when he was our age. He spoke about Larry and me. This was our honoring, and that silver bowl I treasured. A few years later, a housekeeper scrubbed the hell out of that bowl, scratching off all the silver. My mom suggested I throw it out but no! That bowl, in all its glory, silver or scratched, meant so much to me. The kindness and strength, the motivational and inspirational brilliance of Bob brought many of us together in those too few summers, where we improved, continually exceeding our own best times, where we learned and thrived together. It was a time of belonging, community, teamwork, and fun.

Larry would later become an acupuncturist and Tai Chi teacher living in Florida. His brother, Rob, and I occasionally kept in touch. Bob went on to coach a swim team in Rochester, NY, for a long time, and then he became a biomechanics professor at San Francisco State University. I think I must have had young crushes on all of them, including Mark, a breaststroker who became Director of the Brooklyn Eye Surgery Center and was a well-known and accomplished ophthalmic surgeon. Mark and I went to the same high school so we would pass each other in the hall with a quick hello. He seemed studious and shy, and I was super shy. But in those few summers, it was as if inhibitions gently relaxed. The golden years of youth that included swimming where Bob, after our swim meets or after a strong but shortened practice, would call for water games. The days when water polo and Marco Polo ruled.

Several years ago, I was about an hour’s drive from San Francisco. I thought about making an unexpected appearance at Bob’s office, but it was a long drive across the bridge, and I didn’t know if he’d be there. I never made that drive to see him, though I imagined seeing him after all those years. I looked him up again, one day, and found out he died in 2016 of pancreatic cancer. Dear Mark died in a car accident in 2019. And I always thought I’d see Larry again. Being involved in the alternative-cooperative health and wellness field, myself, I knew we’d have a lot in common. Two weeks ago, I looked Larry up online, wondering what he was up to and if he was in the area impacted by Hurricane Ian. I couldn’t find him and then wondered if he had retired. His brother, Rob, contacted me the following week and told me Larry died suddenly the week before, the week I had looked him up. I reeled.

It’s hard to believe that you have all left this world. If only we had had reunions for swimming teams. But children grow up and become adults, going to high school and college, getting married and having children and careers. I would not see any of you again. But I still have that silver bowl. I still swim several times a week, and people still comment on my stroke. Through the years, I have thought about all of you way more than any of you would have known, the people I swam with from the heyday of my young life. I carry each of you with me in my heart as I glide through the water, and I will remember you always, and still.