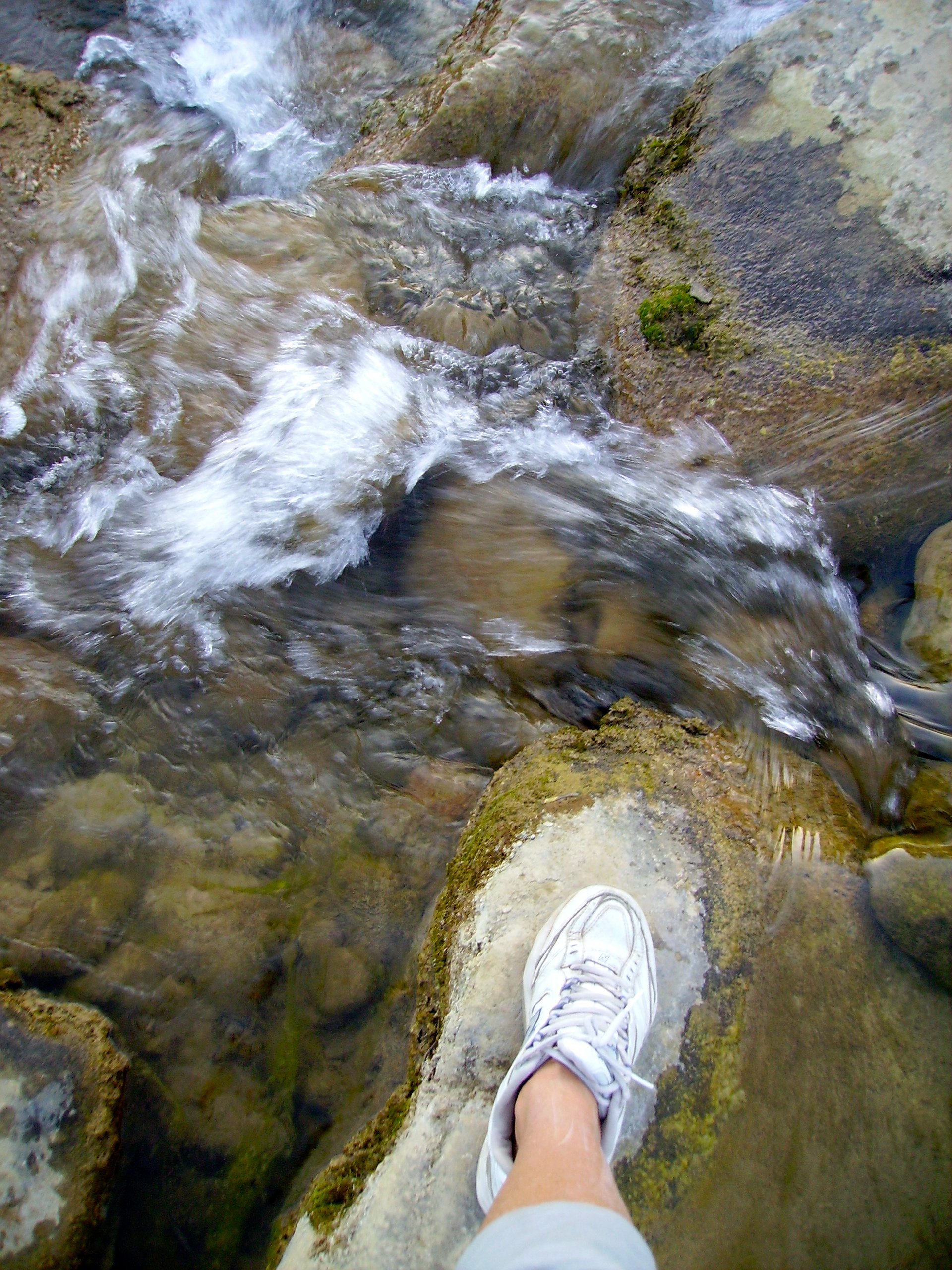 ONE STEP AT A TIME

YOUR SPIRIT AND TIME

When you worry about future time, everything will be that much further away, because you are gauging your Self and your creations against some distant shore that’s always on the horizon. Whereas, when you give up thinking about time, everything comes rushing to meet you.

Digging up planted seeds before they break ground leaves you with no fruit at all. Opening the oven before the cake has risen, only hastens its fall. To know what is in your control, and accept what is not in your control takes a sensitive understanding of life’s uncertain circumstances, a drop of surrender, and a good dose of humor. Taking that a step further, you may then discern that what you think is in your control, may never have been. Time is one of those elements.

Man-made time operates independent of personal desire. You can’t stop it. We are run by it, by our clocks and watches, when to be at work, when to pick up the kids from school. However there is also sacred time or temenos. When we enter into a space of temenos, the resulting sense of relaxation is endless. It is the holy sense of spaciousness that follows from the willingness to be engaged in the creative at hand, without debilitating expectations that are burdensome to creativity.

Even everyday occurrences have their own timing regardless of your demand and man-made time. Anxious to speak with a friend, I will call every two minutes, reaching a busy signal. Finally I’ll give up, knowing that for some reason, it’s not time to reach them yet. Then when I least expect it, cleaning a pot in the kitchen sink, I will hear a strong whisper, “Now, call Josh now!! Don’t even finish drying that pot, put it down and pick up the phone.” I obey, and Voila, Josh is there and able to talk. I don’t understand the mechanics of this. I just accept that everything, from paying the bills to making a call, unfolds that way.

When you begin to slow down, what you once thought of as frittering away time: the chores, bills to be paid, laundry and putting gas in your car, all the things that took up your time without “accomplishing” anything or “getting” you anywhere, suddenly become filled with ease. These places where you thought time was frittered away now become places for rest: doing the dishes, research, washing the car. You actually find enjoyment in the little things that once caused you unrest. Worry and anxiety about the small nuisances can no longer capture your attention in any significant way.

Herbert was a co-worker in a book publicity firm I worked with. He was deliberate in his speaking and extraordinarily kind. With his soft demeanor, I wondered how he found his way into the less than genteel publicity business. He was a brilliant poet, the same man who told me not to worry, that creativity just goes underground. I asked him why he wasn’t writing full time and teaching. “Next life,” he said. “This life I just want to perfect my craft.” He was serious. Talk about patience, and having a wide view! For him, this life was simply a chapter in a much larger book.

Like the cycles of the moon and sun, the Creative Process has its own phases and cycles. There is conception – the birth of an idea. Next there is gestation – the holding and molding of that idea, being pregnant with the idea. Then there are the Ah Ha moments when everything falls into place, complete with details, for the full execution of your idea. This is the time when it is no longer an idea but an official child in the world. When it has made its entrance onto the paper, the canvas, into the boardroom, or the research lab. Last, like the tailor’s final altering of the hem, there are the finishing touches. Every part of the creative process has spun within it infinite worlds. Every world is complete unto itself and yet part of the whole.

When someone asked a friend how long it took him to throw a pot on the wheel, he replied, “Ten minutes and twenty years.” Musicians know this well. Their creative process includes all the individual notes made into chords. A wedding of instrument and hand, movement and breath, and years of patient practice spun together in a creation we hear and label music. Enriched by sound, we are often forgetful of the time that went into the process.

When Jennifer told a well-meaning healer about her difficulty in sitting down to write, the healer told Jennifer that she had some hidden anger and to sit down and just do it or to stop complaining. I had a different take. I told Jennifer that I had not a doubt that she would write her novel when the time was right. She was still in gestation phase, preparing and collecting, and her time had not been idle at all. She knew she wanted to write and had been researching and cultivating her ideas for the novel. Notes for it cluttered her desk. She just couldn’t get herself to sit down and write in any consistent manner yet. She was still reading books on her chosen subject and traveling for research. Whether or not she was aware of it, ideas for the direction she would eventually go in were coagulating. I suggested that it wasn’t hidden anger so much as ripening agitation, the movement of her Soul urging her in a particular direction. I then suggested that perhaps her “anger” had more to do with the fact that she felt she should be somewhere she was simply not yet ready to be.

Several years ago, in a test, they found cells that “may not be normal.” They bolt-typed the word “may” and wanted me to come back for more tests and possibly a biopsy. For those first few moments when I received this news that something might possibly be awry, reality shifted. I was viscerally confronted with the question. “If I had a year or six months left to live, what would I do?” My first thoughts were of my lifelong friends back east I hadn’t seen in two years. The next thought was gently musing. “Gee, I guess what I thought I had to do wasn’t that important after all, because the Creator has other plans for me, other ways I will be of service when I leave this planet Earth.” Immediately I relaxed. The musing continued. “Friends, family, and travel were most important to me, and there must be a timing for my life different from the one I planned.” Driving all the way to LA I thought about death, my death. Thinking about it brought me into the present or into a state of Presence. It was a surreal and super-real drive. I didn’t hop on a plane to NY, but I did put it in my calendar to return east that fall. I thought about time again. “Where does all this rushing around get us anyway, to the grave?”

I had meetings in LA, and then returned home thankful for the fact that I write. It is what brings peace, where Spirit is translated into words. In the midst of Hollywood hoopla and the frenetic energy of people pushing to get things done, writing and teaching grounded me. I realized if I had a few months to live, I would not be driving to Los Angeles. Within a few months, my drives to LA became less frequent. I stepped into the moment, this moment. Not the next, nor the last. Ironically it was a sense of timeless that grounded my whirling thoughts. I changed my diet, added healthy supplements and herbs, and took daily care of me. Two months later the second tests revealed that everything was normal. This experience was an additional reference point to know that in the blink of an eye everything changes, and that time is the least important thing of all.

If good things arrive in small packages and great wines ripen with age, if world class romances never grow old but continue flowering with fruit long after the lovers first set eyes on each other, then the same is true for the Creative Self. Give up wanting to know how and when things will come and enjoy the labors. That is the true joy. Revel in Creation, as Creator. Revel in the slow and revel in the rush. It is creative, all, and fodder for the ground. When most despondent, creativity lifts the spirit. Not because we are trying to lift the spirit, but because we are fully expressing whatever it is that needs to be expressed—from Heart.

We come into this body like a boat, and point it upstream struggling against the tides. Soon we gain some sense and turn it sideways. Then we struggle, struggle, drift. Exhausted, we turn the boat downstream, put our feet up, and enjoy riding upon waves of Grace.

Time doesn’t end and it never began. Your whole life will be like this. You will create. And create. And create. You, as a creator, cannot help but to create. It is your very nature. So do not worry about the outcomes of when things will come to pass.

The trees are plenty full with buds. All that needs to occur is for the seasons to turn and you shall see your dreams in full-fruited bloom.