The Power of Story to Bring World Peace

The Power of Story to Bring World Peace

Storytelling is as old as time itself
Through story, song and dance we have lived and loved
Created community, celebrated and grieved
We hear and tell them constantly
Stories make us uniquely human
and connect us soul to soul

The black barbershops were packed. Das wandered the street, saw another barber pole, and walked into the white man’s barbershop. The barber, and the three old men waiting turned in unison and stared. ‘What do you want?’ the barber asked.

“‘I need a beard trim. I’m keeping the locks, my dreadlocks.’ I said it in my friendliest white voice with my best friendly Negro vibe. You have to be able to reach out. And if you sound closer to what someone expects and respects then it’s just helpful.” Das watched the old men get trimmed and leave. “I could tell the barber was nervous. I was surprised they left him alone with me.”

“‘It has been a long time since I cut tight hair,’ the barber said delicately.
I reassured him. ‘Let’s try it. I have confidence in you.’”

The barber cut and trimmed, and slowly a gap closed. Long enough for two people to meet and greet and share their stories in peace. The barber told Das that back in his days the blacks worked on the blacks and whites worked on whites, and there wasn’t any crossover between the two. The barber and Das discussed the textural differences between black and white hairs. Das gave him hints on what the black barber’s did to trim his beard, ‘pull the skin tighter and raise the hair up,’ he said.

“I may have trimmed a black guy maybe 25 years ago,” the barber recalled. He said his clientele were the last white guys in the neighborhood because the neighborhood was changing. When the barber finished, Das shook his hand and gave him a nice tip. Leaving the barbershop, he knew something extraordinary had happened.

“I appeared to be large, black, and intimidating, and none of his worst fears came to pass. He didn’t get shot or robbed. Someone else in my position might have copped an attitude or gotten offended by their stares, but something really cool and special happened for us both. I could tell the barber was pleased with himself. He did something he hadn’t done in a while. There was a confluence of cultures and minds—and it was fun.’” Das described a brief moment, but one that has lasted his lifetime. As I’m sure it did, the barber’s. 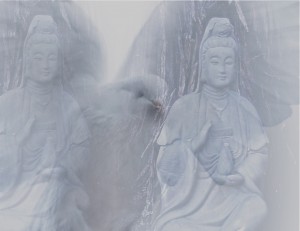 Years ago, my mother had a few people over to the house. At some point, the conversation turned to Bush bashing. It must have been an election year. One man sat oddly silent. I asked the people to be quiet and then turned to the man to ask, “What do you think?” It was a safe enough environment. And there was enough silence so that he knew he would be heard. He told us that most of his family was murdered in the Armenian massacre, the first holocaust of the 20th century. He loved this country and he loved Bush. No one interrupted the man to make their thoughts or opinions known because they no longer mattered. Later the woman doing most of the Bush bashing came to me and said, “You know, I had had it with Republicans, but that man’s story opened my heart.” She didn’t change her position. But his story deepened her compassion long enough so that she could stop throwing darts in her own heart at those who stood on different political ground.

I once witnessed a stanch pro-life supporter who, after reading a book, described to her book group her newfound ability to finally understand someone who would choose to have an abortion. While she wasn’t changing her position, she gained insight and compassion. That our stories can do that is an extraordinary thing.

Regardless of our positions, it is our stories that make us human. They bridge cultural, economic, political, religious, and class differences. They blur the line between who we think we are and who we really are. People. As one young surgeon from Tehran said to me at a long airport layover in Dubai. “I think most of the people in the world just want to love and be loved.” We are more the same than different.

In high school I had friends from all walks of life. One of my more earthy pals came to me and said, “How can you be friends with her?” In my own mind, I thought, how could I not be? The person she inferred was a great person, a close friend. So what if her perfume reeked into every classroom down the hallway. She was more than her fragrance scent.

My father was the same way. If you put all the men who claimed him as their best friend in the same room, a fight would have broken out. One of my dad’s friends told me how, when he used to spout his political beliefs, my father just listened never having to make his own views known. It was only years later, when that friend ‘switched sides’ that he realized with astonishment that my father had been on the other side of the political table all along.

So what, other than perhaps Divine ordinance, creates these bridges of opportunity for deeper understanding when a more difficult outcome could just as easily occur? What operates is a fundamental untainted curiosity to know another human being or situation. For a moment in time, there is a stay from fear replaced by the feeling of safety. One recognizes the warm invitation to walk on to hitherto unbidden land to explore a different world or another point of view. The gift of story is that they create safe rooms to wonder and wander in without threat of retaliation. Sometimes, something greater is at stake, a mutual calling or a Force that parts the veils of separation. For example, the widespread unofficial Christmas truces that took place during World War I, when soldiers on opposite sides stopped their fighting to celebrate and sing together, and even exchange gifts. It’s kind of crazy that they picked up guns to fight again after that. 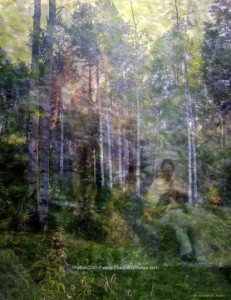 James Baldwin said: “To write in order to change the world knowing perfectly well that you probably can’t but also knowing that literature is indispensable to the world. The world changes according to the way people see it, and if you alter, even by a millimeter, the way people look at reality, then you can change it.”

When we are genuinely curious to hear another’s story, without personal agenda banging at the door, we broaden our palette. When we share our stories for the sheer joy of connection, we broaden the palette. We take a breath, and slip in between time. We find cracks, sacred imperfections that are already whole by design.

Whether we paint with our words, dance with our art, sing with our stories, pause with our prayers, or simply reach out, as my friend Das says, the light streams in.

In the space between what was and what will be lies eternity. There we rediscover ‘other.’ The one who we think is different. Until they become beloved lover, brother and sister, mother and father, our family and friend.

And that is the power of story to bring world peace.